“We actually saved money with an interim executive director and the results make the investment even more valuable.”
-Eric Coleman, Board President, Montgomery County Association for the Blind 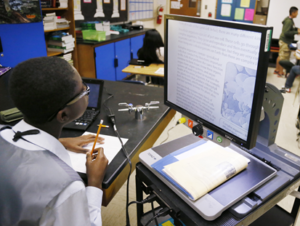 The 65-year-old Montgomery County Association for the Blind (MCAB), which serves the visually impaired throughout Montgomery County, was at risk of closing its doors and leaving thousands of local individuals without essential services that contributed to safer and more independent lives. With the help of an Interim Executive Director from The Nonprofit Center, the North Wales-based nonprofit is now positioned to solidify its financial footing and back on track delivering training, transportation, equipment, recreation opportunities, and more to its clients.

“MCAB had suffered from a number of serious issues,” said Eric Coleman, president of the board, “including relying too heavily on its endowment for operating support, an antiquated database, inconsistent leadership and other liabilities the board came to recognize.”

“We made some tough decisions about our leadership and rather than hire a new executive director while we were in this uncertain state, we utilized The Nonprofit Center’s Interim Executive Director Program,” Eric explained.

The Nonprofit Center matched MCAB with Alisa Baratta who works with the center to serve six to nine month stints as an interim leader for organizations that are at a crossroads and don’t want to bring in a permanent executive during this transition period.

“One of the greatest benefits that using an interim executive brings is objectivity,” Eric said. “The interim executive cannot become the permanent director, so she doesn’t come in with her own agenda and isn’t afraid to be honest, to ruffle feathers and deliver the tough messages,” he explains.

The Nonprofit Center has a small corps of interim executives, experienced former nonprofit leaders who enjoy the challenge of coming into a new situation to actively identify the scope of the problem and make recommendations to the board about necessary changes.

“Like many nonprofits who are struggling with day-to-day service delivery, MCAB hadn’t been proactive in building resources for the future,” Alisa said. “Their leadership excelled in fulfilling its mission, but not in business. This combined with a failing economy created a perfect storm.

“But an interim executive comes to the table with a strong sense of how to protect an organization’s assets and services, “Alisa elaborated. “ We’re not there to soothe the board or meet the needs of particular stake-holders, but rather to support of the overall mission and assets in the context of today’s environment. ” she added.

Alisa’s analysis condition uncovered serious cash flow problems, a lack of information about the finances among the board, and fiscal and administrative inadequacies. “I concluded that MCAB was in such a deep hole it couldn’t survive on a stand-alone basis,” she said. “I identified three options that included maintaining the status quo until the endowment ran out, shutting down, or finding a partner with an efficient management infrastructure.

The board chose the third option, partnering with Keystone Management. “Under this new arrangement, Keystone provides management services to MCAB, including operations, fundraising and finances. This arrangement, which Keystone already effectively executes with several similar organizations,” Eric said, “is allowing us to maintain our life-enhancing services, like providing door-to-door transportation for the visually impaired, in-home training in technology and life skills and all our other services that support independent living for the visually impaired.

Another dramatic improvement Alisa shepherded was an arrangement with a property management firm so that the building that MCAB owns and operates from now has signed leases that will bring in several hundred thousand dollars in rental revenue, along with better building management. She headed the transition team to provide continuity during the orientation period with Keystone.

Eric asserted that utilizing an interim executive director is actually cost effective. “After a short initial full-time period, the interim works about 20 hours a week, and the organization doesn’t have to pay benefits. We actually saved money with this arrangement and the results make the investment even more valuable,” he added.

He concedes that it has not been an easy journey for MCAB to get to this place where its future –and the services to its visually impaired constituents — has been fortified. “But as someone who suffers from macular degeneration and saw loved ones become legally blind, I am committed to our mission and I really admire my colleagues on the board who were willing to take an honest look at the leadership we were providing, making some difficult decisions for the long-term good,” he said.