This semester, I taught one class in nonprofit management in La Salle’s MBA program and another in its Masters in Nonprofit Leadership program.  And while I have taught the former for about 10 years, this is only the third time I taught this in the Nonprofit Leadership Master’s. But this was the first time I have had the opportunity to teach them simultaneously, and it was interesting to compare the two student groups. 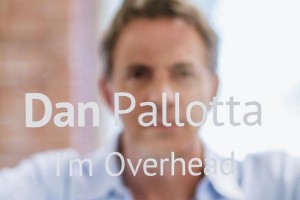 At the end of the semester, I learned that the most influential activity for the vast majority of these 35 students in all was watching Dan Pallotta’s TedTalk, “The way we think about charity is dead wrong.”  It is 18.54 minutes long, available with subtitles in 26 different languages and has been watched over 3.5 million times.   I even had them watch the number three most watched TedTalk—Simon Sinek’s “How great leaders inspire action”—only 18.04 minutes, available with subtitles in 46 different languages and watched over 22.2 million times.  Maybe it is the extra 50 seconds, but student after student in both classes referred to Pallotta’s talk as a “game changer.” It was “transformative” and “eye opening” and “brought everything together.”  One MBA student found it so powerful that it warranted “changing the script” for nonprofits.

Truth be told, the fact that this one piece—that is about the basics of running a business—was equally powerful for MBA students (all but three of whom work in the for-profit sector, and most in major corporations), and nonprofit students (all of whom work in the nonprofit sector, at mostly mid-levels of the org chart and above, all the way to the number two spot) was both exciting and depressing.

I always like my bad news first, so let’s address the depressing part.  Pallotta’s TedTalk came out in March 2013.  In the fall of that year, GuideStar, BBB Wise Giving Alliance and Charity Navigator wrote their mea culpa letter to nonprofits saying what nonprofits already knew—overhead isn’t the best way to judge the goodness of a nonprofit—and, then, a year later wrote their letter to the “Donors of America” telling them the same thing.  It asked for the nonprofits’ help in correcting the very error that they had promulgated.  (But I’ve vented on that before.)  Here we are, two years after Pallotta’s TedTalk, approaching a two-year anniversary on the first letter and a one-year anniversary on the second, and not stupid folks in the nonprofit sector are being awed-for the first time-by Pallotta’s message.  No offense to him, he wasn’t the first to bang the drum of nonprofits needing to be more businesslike in many ways -including spending money on marketing and salaries and other infrastructure costs-to make money; but he was the first to do it on social media.

So, why has this message not permeated the ranks of every nonprofit?  Why isn’t this old new for those who work day in and day out in the nonprofit sector?   Why hasn’t every nonprofit board, staff member and volunteer, every reporter who covers nonprofits, every marketing company’s and CPA firm’s staff members who work with nonprofits—and my list goes on—watched this TedTalk?  We all can spare 18.54 minutes for a game changer!

And this brings me to the good news—the excitement, the potential.  My experience with MBA students and those who work in the corporate world is that they believe that it takes money to make money—and are willing to spend it to do so—and that talent follows money—and they are willing to spend it to get it.  Add to that the wonderful change that I have noticed in MBA students, even in the course of 10:  they have an expanding social conscience, care about making the world better and want to help make it so—with their money and their time, and their organization’s money.  They want to be involved in their company’s CSR program to make it better, stronger, with greater impact.  They want to help solve the social ills of the world—but more from a distance, helping nonprofits but not working in nonprofits.  To do this, they need that different script for understanding nonprofits—one that doesn’t portray nonprofits as “mere” do-gooders, who scape by anyway they can and settle for whatever talent they can grab to put band-aids on people’s problems.  Rather, they need a script that talks about the business needs of successful nonprofits and offers up the social impact data that is the return on investment.

Our current script does none of this; sadly, our current script whines (no wonder we need a new one).  Our new script must proclaim in the business world’s language that we are one of them, needing the same tools to achieve a different success.