Over the past several months, I have been struggling with the question of best practices:  whose best practices?  And, do best practices really allow for flexibility and latitude when integrating them into the unique culture that exists in each of our organizations? 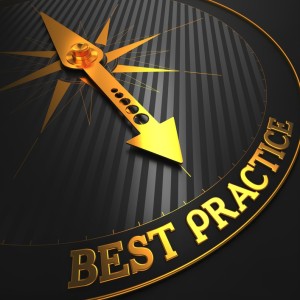 As those of you who read this blog regularly probably know by now, my first career was as an academic criminologist.  While there are many different theories that explain what makes some people criminals and others not, one of the more dominant ones explained crime as the innovative response to wanting the same end goals—money and material goods—without having the “socially sanctioned” means for getting those goals.  This theory, however, was always troubling to me because it assumes that there is such a thing as a set of universally desired ends, as well as a set of universally accepted means.  But, if we are honest, there aren’t.  Some people are satisfied with much less than others, and some will never have enough, no matter what they already have.  Some people look askance at those who are willing to accept much less in financial rewards in order to live more simply, or in order to help others (yes, I’m talking about nonprofit employees).

And so, despite always saying that The Nonprofit Center works from a premise of best practices—which we do—and that we want all organizations somewhere on that good-better-best continuum, always working towards the best end, I find myself wondering if that is the right (excuse me, the best) message to be giving?

Do best practices give organizations enough room to customize to mesh with their organizations’ cultures?  I’ve always believed so, but I’m beginning to wonder if we are doing organizations a disservice.  (I have absolutely no question that “standards”, regardless of what kinds of standards we are discussing that lead to seals of approval, allow for no flexibility; standards are rigid—either you have met them or not.  There is no sliding scale, no room for customization in how the adherence to those standards will look).

Perhaps the resolution to my dilemma rests with understanding what makes something a best practice?  Best practices are those that when followed have been shown to lead to success, more often than not, for a wide variety of organizations, not just an organization of a certain kind.

But this begs the question of what is success, and does success look the same for all nonprofits?  When I speak of success I am speaking of:

b) being viable for the long-haul, where the long haul is for however long the organization’s mission will be needed. So, while the particulars of success will not look the same for every organization, the parameters of success do.

Within the last week or so, two things have fueled my concern.  First was a conversation someone seeking direction in setting up a nonprofit.  (Always the wrong idea to bring to me.)  But, to his credit, he and others also weren’t sure whether that was the really the best choice for the organization which was currently acting under a fiscal sponsorship who wanted out.  At the same time this was happening, the group was getting pressure from funders and others to be an independent organization.  They were told it would be better for them; it was the thing to do, the next stage of their evolution.

I could hear nothing in this organization’s story—past or future—that said it should ever be an independent entity.  It was, and according to the group that was running it, always would be a one trick pony.  The group knew what needed to be done and it involved doing that single thing.  Why take on the work of running an entire organization just to do one thing?

Yet, apparently many others were telling them that the “socially sanctioned” end meant the socially sanctioned goal of independence—and a disproportionate amount of work, money and time going to maintain a body instead of simply doing that one thing.  One size never has fit all and never will, but does the best practices mantra promote that?  Or is it the translation of those practices into action that people see as being of one size?

And then came the second event:  I heard Myrl Beam’s lament that the LGBTQ slice of the nonprofit sector has been coopted and misdirected by the sector at large, causing it to tone down its radicalism and push it to work on the less important (Beam’s classification, not mine) LGBTQ issue of marriage instead of the more important issues of poverty, healthcare, housing for the elderly.

Did the nonprofit sector do that?  Did best practices do that?  Does using proven paths equate with don’t try novel ones?  Weren’t today’s proven paths once some period’s radical, innovative ones?  Aren’t radicalism and “mainstreaming” intentional choices that leaders—both the volunteer leaders and paid ones—make for an organization?  Is it the model of operation’s fault if the leaders of an organization haven’t defined what their own success looks like and then carved out and stuck to the path to get there?

In criminology, as in other disciplines, there is always a good debate as to whether crime is a function of free will:  does a person consciously chose to become a criminal or do the options—the forks in life’s roads—that people have by virtue of where and who they are,  steer them in one more likely direction than another?  Is how a nonprofit operates a matter of the conscious choice of its leaders or the force of the sector of which it is a part, and out of which best practices spring?