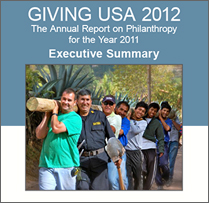 The Center on Philanthropy just released its Giving USA 2012 report.  To announce the findings, they take their dog and pony show on the road and included Philadelphia for the first time. .

In case you have missed the high level summary of the results, here it is.  (I’ll leave you to decide whether the news is good, bad or indifferent.)

There is a lot more to be gleaned from this report, but the more interesting things to be learned came from comments by Patrick Rooney, the Executive Director of the Center on Philanthropy.  But here are some of the more salient ones, paraphrased, of course, that truly deserve every nonprofit’s (that wishes to survive) attention—and why.

Comment:  When government spending in a subsector increases, private giving in that subsector decreases.

Why we need to know this:  All too frequently, when we hear of government cuts—or funding cuts and shifts from any source—we are all too quick to wipe our brows, pat ourselves on the back and say, “Phew! Dodged that bullet!” and go back to what we were doing.  Instead, we need to constantly be monitoring and paying attention to the conversations of our various government entities, regardless of how convoluted and “three steps forward one step back” they may be.  By listening, we may actually become proactive and smart, shift strategies well in advance and allow ourselves to continue to dodge bullets.

Comment:  The most difficult giving pattern to predict is planned giving.  The three richest people who die in a year determine the size of this slice of the private giving pie.

Why does this matter? It doesn’t!  What matters is that planned giving is a strategy in most every nonprofit’s development toolkit, whether that means you have dedicated development staff who know the ins and outs of arranging these gifts or you rely on financial management companies, estate attorneys or whomever.  What matters is that board members are aware of their responsibility to cultivate donors, are equipped to do so and are out there doing it!  The reality is that over the years, planned giving has been comprising an increasingly large portion of that individual giving pie slice, but it doesn’t really matter to your nonprofit whether it grows by almost 9% (adjusted for inflation) as it did in 2011, or 7% or 12%.  You still just have to do it!

Comment:  There is a strong and positive correlation between parents who gave/give to charities and their adult children doing the same.  And this holds whether the giving was to religious or secular organizations.

Why should you pay attention to this?  Here and elsewhere, there is evidence that philanthropy is learned behavior, acquired at an early age.  As with any learned behavior, one is never too old to learn the desired behavior, though it comes with a learning curve.  Thus, far better to recruit board members who learned the importance of philanthropy at mom’s, dad’s, grandma’s, and grandpa’s knees for my anecdotal and observational data tells me that these are the board members who don’t fight or shirk their fundraising responsibility.  Once equipped, they sally forth and do their job!

Comment:  Every year, approximately 2/3 of Americans make at least one charitable donation, with average household giving at  $2000.  More than half of these donors—56%–give every year.  Looking at the Bank of America/Center on Philanthropy annual studies of the top 3% income earners, 98% of them give to charities every year.

Comment:  If you take the average growth rate of giving, it will take over a decade before individual giving is back to its 2007 level.

Why this is important:  Even if you believe the statements that economic recovery has begun in this country, the nonprofit sector’s recovery, which always lags behind the rest of the economy, is way off on the horizon.  This means continued full-court presses by both board and staff; on-going creativity in the how, what, where, and why of fundraising; constant attention to having as diversified a revenue strategy as possible; unvarying attention to both existing donors and bringing in and on new donors; and the list could go on.  This is a long-distance race; no sprinters allowed.

Fundraising, regardless of the economic times, has always been and will always be a job for those who can go the distance.  So, folks, put your endurance gear on, and keep on trekking.  The mountain remains particularly high for the years to come.