Home / Thoughts & Commentary / No Such Thing as Overhead

In a comment on a recent discussion board post, a master’s student of mine commented that the three signers of the well-known “Overhead Myth” letters had taken a great risk and made great progress in doing so.  I delicately questioned just what she thought the risk was and just what she saw as the progress made.  I pointed out that the first letter was written in 2013, the second in 2014.  Here we were, three years after the second letter hit the airwaves, and more often than not, the first question people still ask of a nonprofit is “what is your overhead?” (or some equivalent).  I’m struggling to see the progress here. 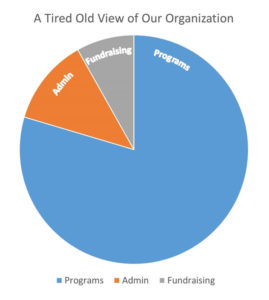 The reality is that despite Dan Pallotta’s 2013 TedTalk receiving over 4 million views in the four years since it was delivered, and the “Overhead Myth” letters having their own websites, so they are super easy to find, overturning the notion that overhead should drive nonprofits and, therefore, drive funders’ thinking, has not made much headway.

The vast majority of students in La Salle’s masters program, 90% of whom work full-time in the nonprofit sector, are watching and reading these assignments for the first time.  One hundred percent of the boards to which I have mentioned the “Overhead Myth” over the last several years have no idea what I am talking about—in terms of both the letters and the issue they represent; very few have heard of or watched Pallotta’s talk.  While a few of the executive directors know of the letters, more have heard of Pallotta’s talk; less have watched it, and even fewer have brought it to the attention of their boards.  How, then, could there possibly be progress?

Sadly, nonprofits continue to be judged by money alone; too infrequently, and always too late in the game, does programmatic impact enter the discussion.  This isn’t going to be changed by leaders of the charity watchdog groups; it isn’t going to change by giving talks; it is unlikely to change at the initiative of funders.  The only way it is going to change is if nonprofit leaders—yes, every executive director, director of development, program director, finance director, etc.—change the conversation.

As is so often the case with the nonprofit sector, we are our own worst enemies.  In this case, we have allowed others to frame our conversation.   And, as if that weren’t bad enough, we brought their conversation into our own organizations.  It was no surprise that the library employee labeled herself overhead.  I see nonprofit after nonprofit subtly, and not so subtly, divide staff by those who “do the mission work” and those who “support them.”  Within that division is a clear hierarchy:  those who do the mission work are the important ones, while those who support them are second-class citizens.  Besides the fact that that such a divide is not healthy for any organization, it is such thinking that perpetuates the false understanding of how nonprofits should be judged, as if the ability to fulfill mission promises can be separated from the ability to keep good finances, have functioning technology, raise funds for the organization, etc.

In the world of finance, overhead refers to those ongoing operating expenses necessary to creating an organization’s product and running a business; they include expenses that do not directly produce revenue.   (Funny, then, that fundraising costs, those costs that produce a good amount of revenue for nonprofits, gets counted in overhead in the world of nonprofits.  And I don’t buy that fundraising isn’t selling a product, as good fundraising successfully sells the promise that every nonprofit offers—the promise of doing their mission.)

Overhead is seen as a necessary burden, the cost that must be borne in order to get to the desired end.  In the for-profit world, these costs are, without a bat of the eye, billed directly to clients, as everyone recognizes that the ultimate products purchased couldn’t be produced and received without the contributions of these overhead functions.  For-profits don’t get pushback on these expenditures (if they did, perhaps we would see more shareholders challenging the luxury headquarters and private flights that take money out of their dividends); they are not held accountable for every penny they spend.  But nonprofits are (yet another example of the double standards that exist for for-profits and nonprofits), and we must (re)educate our staff, funders and the general public about how overhead really works in the nonprofit sector.

That reality is we don’t have overhead.  We must stop talking about our fundraising costs as overhead, our electric bill as overhead, our marketing and evaluation staff as overhead, our executive director’s time spent networking with potential partners as overhead, and so on.  These aren’t things that are necessary evils, but essential partners in every nonprofit’s ability to deliver on its mission promises.  These are parts that, when added all together, are mandatory elements in successful program implementation and achievement of promised impact.   On one level, funders do recognize the indispensible nature of these pieces to a mission’s achievement:  some do provide operating grants or allow a small percentage of programmatic grant dollars to go to paying a fraction of their costs.  But on the other level, they don’t get it at all, or there would be no discussion of this thing called overhead.  But just because those who have framed our conversation have deemed that is how it should be does not mean that we should accept it.

We must take control of this conversation, beginning with our own staff and board members.  And then every one must have the guts and tenacity to take this conversation outside of their own organizations to donors and the rest of the world.  If in doubt, if feeling fearful, imagine a university without a library and you can imagine the nonprofit sector of the future if we don’t change the conversation now.