Home / Thoughts & Commentary / Having it All (Been There…Done That) 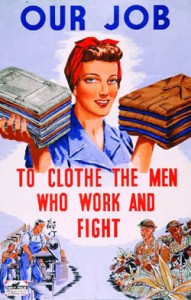 My 20-something niece and her friends truly believe that they can, indeed, have it all while they work in the top organizations in their fields, and have their careers and personal lives planned accordingly.  While she indulged her mother’s and my rebuffs and buts (she’s very patient with us), and our pointing out quite bluntly that she and her friends were not all representative of the average American woman, she thought we weren’t seeing the progress that has been made.

The very next week, “the” Atlantic Monthly article came out—the one every woman was reading (Perhaps even more so than “Fifty Shades of Grey?”  Nah!):  “Why Women Still Can’t Have it All.”  And then I read a couple of new studies looking at how women are faring in the workplace.

Catalyst recently published “High Potentials in the Pipeline:  Leaders Pay it Forward.”  This latest report comes from Catalyst’s longitudinal study of graduates from “leading business schools” in the United States, Canada, Europe and Asia.  While this latest report points out many interesting findings, one, in particular, caught my eye.

While not surprising, the research found that, in general, women bosses are more likely to develop others than are men bosses.  Disappointingly, only 65% of women who were mentored/developed were providing development and mentoring  to others now that they were in a position to do so; men who had been mentored were even less likely (56%) to now mentor others.  But here’s what did the eye catching:  73% of women who were “paying it forward,” in other words, had been mentored and were now mentoring others, were developing women, while only 30% of their male peers paying it forward were developing women.

Currently, no one seems to have a definitive answer as to what percentage of nonprofits are headed by women.  Anecdotally, the numbers are high, and I don’t think it would be far off to suggest, conservatively, that 60-75% of nonprofits have female leaders—on the paying side.

That percentage dramatically flips, and it would be safe to say, widens, as you move up the budget ladder.  There is an inverse relationship between the number of women executive directors—actually, I should say presidents and CEOs, as there is a direct relationship between the size of the budget and those who fancy themselves as CEOs as opposed to executive directors—and the size of the budget:  the larger the budget, the less likely there is a woman at the helm.  Thus, when you get to the really large nonprofits—hospitals, schools, drug and alcohol facilities, mega multi-service social service organizations, the nonprofits that want to look and operate like for-profits rather than nonprofits—the number of female-headed organizations dramatically drops.

It has always disturbed me that even in the nonprofit sector we manage to have male leaders of pink color industries:  social workers, teachers, counselors, nurses, intake workers, care givers, etc. who work in a large organization are likely to have a male CEO.  This fact, coupled with Catalyst’s findings disturb me:  if only 30% of the male leaders at these large nonprofits are mentoring women, how will we ever right the imbalance of women leaders of large nonprofits?  And while I applaud the women leaders, predominantly in the smaller and, therefore, flatter organizations, with many fewer opportunities—if any—for upward mobility, who are mentoring their female employees, is the nonprofit sector providing them with enough opportunities to which to aspire?

Another set of recently released research findings from folks at University of North Carolina at Chapel Hill, NYU and University of Utah sent shivers up and down my spine. Using the combined data from four other research projects, these three researchers looked at 718 married men in the workforce, and found that men in a traditional marriage—where the woman stayed at home or worked only part-time out of the home—were much more likely to:

Seriously?  It is 2012!  And, yes, this research is from the current century!

And just in case we—those who are about the future of our young women–aren’t depressed enough already, I’ve got more disturbing data!  The New York Times recently looked at the influx of men into pink collar jobs from 2000-2010:  they found that almost 1/3 of the job growth for men—double that of the previous decade–happened in occupations that were more than 70% female.  And adding insult to injury, the Institute for Women’s Policy Research pointed out that in the 20 most common occupations for women—many of which are in the nonprofit sector—men out-earned women in all but two!

I firmly believe that we in the nonprofit sector have a moral responsibility to make our workforce an egalitarian one and accessible at every level of the hierarchy to anyone, regardless of sex (please, everyone, stop misusing gender when it is really sex), ethnicity, age, sexual orientation, you name it.  This week, while Independence Day is still fresh in our minds, would be a great time to start looking fairly and squarely at your organization—regardless of its size and mission—and ask the question:  are you really and truly an employer who hires equally? Are you really and truly an employer who judges equally and promotes and hires fairly?  Are you really and truly a workplace devoid of stereotypical thinking and actions?