I don’t know if the late Senator William Proxmire and Thomas Szasz, MD, ever met, but they had a lot in common.  Proxmire was a Democratic Senator (and Hill School graduate) from Wisconsin from 1957-1989.  He’s perhaps best known as the creator of the Golden Fleece Award which he gave to government funded research projects that he thought were a waste, as they merely demonstrated what everyone already knew.  Szasz is a psychiatrist and academic who long ago infuriated many of his colleagues in psychiatry by accusing them of making simple “misbehavior” into “disease” in order to justify their own importance and value. 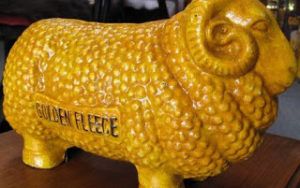 Both Proxmire and Szasz would likely be equally amused by two new research studies on the value of the ratings by charity watchdog groups, and the watchdog groups’ reactions to the studies.

The studies, one by George E. Mitchell, research assistant with Transnational NGO Initiative at the Moynihan Institute of  Global Affairs at Syracuse University, and the other by Jessica E. Sowa, Associate Professor at the School of Public Affairs at the University of Colorado in Denver, were commissioned by the Direct Marketing Association Nonprofit Federation.  Breaking it down to the bare essentials, both studies found the watchdog group’s ratings sorely lacking, problematic and potentially damaging to a charity.  But to anyone with half a brain, this should not come as any surprise.  Hence, had these studies been funded with government funds, I’ve no doubt Proxmire, were he still alive, would recognize them as strong candidates for the Golden Fleece Award.

Who would think, for a minute, that financial benchmarks, which Mitchell labels “arbitrary and inconsistent” would be a good indicator of an organization’s overall effectiveness and efficiency?  The answer? Watchdog groups!  Mitchell further points out that some financial benchmarks, such as the cost of raising a $1 contribution, are beyond the control of nonprofits, as the cost of raising funds is determined jointly by the charity and the donor.  Few executive directors, Mitchell notes would define organizational success as “overhead minimization,” yet watchdog groups do.  He says, “A more appropriate measure of organizational effectiveness would measure the extent to which organizations are achieving their promised goals.”  Duh!  And that duh is not for Mitchell or Sowa (whose conclusions are in synch with Mitchell’s), but rather for the watchdog groups who created the ratings systems and everyone else who believes in them, from nonprofits staff and board who seek the “stars” from the watchdog groups and the general public who uses the stars to make a determination of whether a nonprofit is worthy or not.

Let’s be clear.  I’ve said again and again in these posts that nonprofits are businesses that must pay attention to their bottom lines.  But they must pay attention to the bottom line tempered by the ability to fulfill mission promises.  Nonprofits that don’t pay attention to their financials are those that risk not being around tomorrow.  Hear me loud and clear: I am not for a moment discrediting the value and importance of financials when used appropriately, but only when put forth as a valid measure of an organization’s goodness.  But to use them to judge an organization’s effectiveness or efficiency is ludicrous, as we are using, as Mitchell notes, an “untested assumption” as “credible evidence is lacking that any such connections [between financial ratios and organizational effectiveness] exist empirically.”   And yet donors, and others, make all kinds of assumptions about a nonprofit based on “stars” awarded as a result of a methodology that has never been shown to be valid.  Where is the logic in that?  But at least now we have academic research to challenge that which has always defied common sense.

But the watchdog groups are fighting back, defending their value and importance.  Ah, Dr. Szasz, me thinks they doth protest too much! Charity Navigator responded to the studies by saying that the measures the researchers suggest don’t currently exist, thus leaving financial data as the only tool available to measure organizational goodness.  Wow!  Another demonstration of great logic:  the good measures don’t exist so let’s just use what is available even though there is no empirical evidence that demonstrates that it does, indeed, measure what we are saying our ratings scale measures.

American Institute of Philanthropy defends its work—and therefore its need to exist—by blaming the victim.  And I just love it!  (I am being facetious.)  Its president, Daniel Borochoff, said that “[c]harities are in denial when they say financial performance measurements are somehow not relevant or important.”  Excuse me?  In the last 30 years, has anyone heard an executive director say that the financial performance of her organization is not relevant or important?  in fact, more and more executive directors will tell you they spend more and more of their time assessing—for some it is even obsessing–and worrying about the financial health and well-being of their organizations.

And in defending his organization, and other watchdog groups, as vitally important, Borochoff said, “[i]t is pathetic and sickening that there are so many charities ripping the public off.”  There are 1.8 million charities in the United States; but at 1% that would mean 18000 charities are “ripping off” the public every year.  Are there that many?  more? less? I have no idea.  And though having even one nonprofit trying to rip off the public is quite distasteful, to say there are “so many” conjures up figures of 25% or higher.  And we simply are not there.  For I do know that the vast, vast majority of nonprofits are not ripping off the public or their donors, nor do they have the hopes or goal of doing so.  I find it quite sickening when organizations that set themselves up to be the judge of others rationalize the importance of their business on gross generalizations and an absence of facts.

So, to the spirit of Senator Proxmire, I acknowledge that this research is of the Golden Fleece ilk but with the potential to open people’s eyes to the absurdity of what it studied.  And to Dr. Szasz, the beat goes on:  professions will continue to justify the need for their existence as long as we, the public, allow them to do so.