In March 2013, Dan Pallotta’s iconic TedTalk, “The way we think about charities is dead wrong,” was released; since that time, it has received over 4 million views.  If you aren’t among those four million, and nor are the staff and board of your organization, correct that oversight immediately. 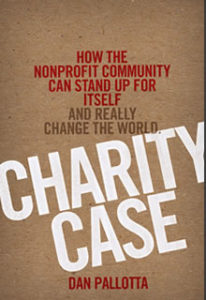 In June of that same year, the three nonprofit watchdog groups (GuideStar, the BBB Wise Giving Alliance, and Charity Navigator), released the first of their two letters trying to debunk the overhead myth—the very thing that they had long perpetrated.

The first letter explaining the fallacy of relying on expenditures on overhead to judge the “goodness” of a charity was addressed to the “Donors of America,” and asked for their help in correcting the myth.  In 2014, these three groups sent a second, similar letter addressed to the “Nonprofits of America.”  I, and others, don’t see the release of the first letter as simple coincidence.

What has happened in the ensuing almost four years?  Not much!  Yes, people keep watching Pallotta’s talk; yes, he is on the speaking circuit; yes, he started the Charity Defense Council.  But little inside or outside the sector has changed.  And outside won’t  change until we do the work inside.

There remains an appallingly large number of people working and volunteering—and here my focus is on, but not limited to, board members—in the nonprofit sector who still don’t get it.  They still believe that compensation (that means salary and benefits) doesn’t matter to nonprofit employees; that talent doesn’t have to be rewarded and cared for in the nonprofit sector just as it is in the for-profit sector.

They still think it is okay to be using arcane computer systems because they got them for free, even though they can’t do everything that is needed to make employees’ work easier and more effective and ensure best service to clients.  They still think that they can’t afford to invest in development and marketing professionals because they are luxuries and will push the overhead ratio too high.  They still believe that they should get goods, services, etc. for free because they are nonprofits and they do good work.

As long as there is one person in our sector who still believes that the way to judge a nonprofit is by how much it spends on overhead, we will never, ever get out from under the overhead noose.

Why has this change been so hard to achieve?  Lack of sector-esteem.  Too many in the sector—again, from the bottom of the org chart to the very top where board members sit—have yet to embrace fully the importance the work of our sector and to see it as an equally essential part of society and our economic engine, as they view the for-profit sector and government.  Until this changes, the rest of society will have us to kick around.

It is the nonprofit paid and volunteer workforce that must educate the rest of the world.  If each and every one of us doesn’t get and it and isn’t armed with a clear and well-substantiated explanation—don’t call it an argument—of the fallacies of the historic starvation mindset for nonprofits, we will never move forward.

If each and everyone of us isn’t equipped with the response to the donor who emphasizes overhead over impact—or is only interested in overhead–or doesn’t know how to ask a funder to cover the true costs of the program for which funds are sought, or refute a colleague’s, family member’s or friend’s lament that an executive director of a particular nonprofit is paid “too much,” we will never get out of our own way.

Only once we have eradicated the mythical thinking that has hampered our sector for too long will be able to not only think about, but actually practice, our charitable work correctly.  We are not looking to be excessive, but simply effective.

Make 2017 your pledge year:  educate yourself, your colleagues, your board.  Together, let’s overcome together the plague that is restricting our own success.