According to the National Center for Charitable Statistics, there are just under 1.6 million nonprofits in the U.S.   The overwhelming majority of them work very hard to fulfill their tax-exempt purpose:  working on behalf of some portion of the public good.  Not all may succeed, not all are doing the best job, but they are all sincerely trying to do the right thing to the best of their sometimes limited capabilities.  That’s the good news. 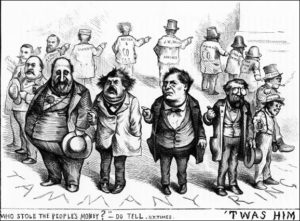 Now some bad news.  Since 2014, the IRS has made it easy and cheap to form a small nonprofit.  Just promise to tell the truth on Form 1023 and pay an application fee of $125.   But we all now easier is not always better.

The latest local politician who seems to have gotten caught in a compromised position with the nonprofit he created is Seth Williams, the current District Attorney of Philadelphia, who had greater political aspirations.  But he’s just the most recent in the a line of Philadelphia politicians who have garnered negative headlines because of their “work” with nonprofits they created.

Of the two most recently caught, one, former Commonwealth Senator Vince Fumo, and the other, former US Congressman Chaka Fattah, one is also done serving his sentence and the other is awaiting sentencing.  But the names and locations of this tale, as well as the year, could be substituted with locations from every other state in the United States.  Contrary to what many think about the state of politics in Pennsylvania, and, in particular, Philadelphia (after all, this is the city of ABSCAM), this is not a uniquely Pennsylvania, or even New York (another state where headlines all too frequently boast of the poor outcomes of mixing politicians and nonprofits).  It is, quite frankly, a politician problem.

Whenever I hear tales of anyone—and not just politicians—abusing a nonprofit for personal benefit, I cannot help but a) get angry and b) want to remind everyone of the purpose of nonprofits.  Theoretically, the IRS vets applicants (that’s a whole, other sad story) for charitable status to determine that the organization is really going to work on behalf of some portion of the public good.  And while politicians love to tell their constituents, and everyone else, that they are “public servants,” they, personally, are not the intended recipient of the good works of nonprofits.  Nor are members of their staff and families, their friends, supporters, etc.

Understand that personal benefit for politicians does not always mean that the politician him/herself directly benefits—although that is quite common, too, as they gain home improvements and luxury cars, other goods and vacations, as examples—but also that others in their circle benefit.  It is a very common tale that politicians create nonprofits, funded with money to which they as politicians at whatever level of government have easy and direct access to funds, along with sufficient influence to access relatively easily other sources of funds (by which I mean funds from those who want favors from them).  They’re likely staffed by partners, children, employees of their political office, relatives of key supporters, etc.  These nonprofits then end up doing very real mission work.

Take, for example, Second Chance Foundation, the nonprofit founded by Seth Williams.  He was elected District Attorney in 2009, assuming office in 2010.  Second Chance Foundation, established in 2011, exists to “is to raise funds to provide financial assistance and resources to vital community-based organizations that serve ‘at-risk’ children, young adults, and families to help them lead more productive lives that promote a safer Philadelphia.”

The mission related parts of the web are less than current:  the  grants application section hasn’t been updated since 2013, as it still announces the deadline for grant applications for that year, and the section featuring past and present grantees is still under construction.  The past event tab, featuring this year’s Prayer Breakfast, was updated, along with the pictures from the event (mostly of Mr. Williams), , were updated after this year’s event.

The 2014 990EZ reveals total revenue of just over $86,000, with an end of the year fund balance of just over $104,000.  Though there is an interim ED listed on the website, who is also a (quite controversial) employee of the District Attorney’s office, there is no such position on the 990.  Thus, looking at the 990, a reader would know that this organization netted $25,650 from two events (a prayer breakfast held annually and a food tasting fundraiser), brought in $60,500 from other raised sources and gave out 11 grants totally $11,700, all, that reader would have to assume, done by volunteers.

This tale of a politician and his nonprofit is not, sadly, anywhere near the most egregious (at least not based on what we know thus far—which may or may not be the end of the story.)  This tale, and ones far, far worse, get repeated regularly throughout the country.

But this can be easily stopped.  Politicians and government employees have all kinds of restrictions placed on them as to what they can/can’t do both as current employees and after they leave government employment.  Yes, these restrictions vary from state to state and at the federal level, but they exist.  All we need to do is add one more no-no:  while in office and once left, a politician may not start a nonprofit, be related to someone who starts a nonprofit or chair the board of a nonprofit.  Too harsh?  Then let’s create an Inspector General’s office that is the watchdog for all nonprofits with which politicians (and senior government officials) have a “special” interest.

I don’t care about the politicians; if they don’t have a strong code of personal ethics, that’s on them.  I’m looking to protect nonprofits everywhere who all get demonized by headlines that expose the wrong-doings of one.