Sometimes, peeves are not merely annoying things; sometimes, they reveal some much bigger issues in play. 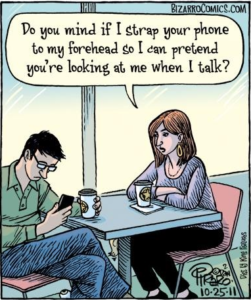 As someone who runs a master’s program in nonprofit leadership, which I also teach, it should come as no surprise that I spend a lot of time thinking about leadership:  what it means to be a great leader, how leadership helps and harms, the tools of a great leader, etc.  And, yes, how good leaders balance their plates.

As I’ve noted before, I really struggle with one of those time management mantras:  only touch an email/mail once:  read it, take care of it, move on to the next item.  Just this morning, I sent emails to four people apologizing and telling them I wasn’t ignoring them but I wouldn’t be able to write a cogent response until next week.  And I will, but because each of the four initial emails that had already been in my inbox between 24-48 hours, I felt compelled to let them know i wasn’t ignoring them, just a bit crunched at the moment.

And I am forever starting to read articles to see if I want to read further, and then putting them aside to come back to later.  Sometimes later comes, sometimes not.  But they are all my choices; I am in control, and I take responsibility for those choices.  I have come to accept that I will not read everything I wish to, but that I read more than enough to be able to do my job exceptionally well; I have no problem apologizing, admitting that I did something wrong (but, please, let’s be clear:  I see nothing wrong in not responding to email within hours, let alone days; I prioritize).  I explain; I don’t make excuses.

And what I don’t do is tell everyone just how busy I am because I know just how busy everyone else is.  Earlier this week, I said to a colleague, “Shall we take bets that X won’t show up for this meeting?”  X hasn’t shown up for a meeting she agreed to attend in the last two years, always having some excuse.   When X didn’t show up for the meeting, a third colleague said to the rest of us, “Well, X is just so busy!”  In those six little words, she also implied a number of other things:  the rest of you here are slackers; X is better and more admirable than the rest of you because she is so busy; and X is special and the rest of you just aren’t as good/valuable.  Really?  You wanted to say all of that?  And can you possibly believe that?

Let me give you another interpretation of the unmet promise to be where you say you will be when you say you will, time after time after time:  you all don’t matter; my time is more valuable than yours; i’m more important than you.  Who wants to be that person’s colleague?  Or the colleague of someone who makes that person’s excuses of being just so busy?  Each of us has the power to make choices of what to do, what not to do; what is a priority, what isn’t; where to be, where not to be.  Good leaders own their decisions; they don’t make excuses or allow others to make excuses for them.

Recently, I met with a potential client to discuss the possibility of our doing some work with them.  The woman who initiated the meeting spent 75% of the meeting on her phone emailing—all in plain sight.  There was no explanation of an emergency situation or some other need that would warrant spending the entire hour emailing.  I left the meeting, emailed a colleague to say we wouldn’t be working with this group, and sent that email to the previously potential client the next morning.  I can assure you that there is nothing this organization does that could even remotely require the need to be on top of email every minute of the day.

The next day we hosted our semi-annual grantmaker panel which ends with the opportunity for audience members to meet each of the panelists personally, making that initial contact, exchanging business cards and briefly conversing.  However, when a young woman entered the auditorium after the program had started and sat in the first row, she immediately got on her phone alternately reading and typing.  No panic or concern on her face, nothing to indicate she was monitoring an emergency at work or at home.  And she continued in that manner for the duration of the panel.  And, no, she wasn’t taking notes, as she had pen and paper on her lap for that—and she did do an occasional note or two.  I know what I was thinking as I watched her, in the front row, head down far more than up and can only wonder what the panelists were thinking.

I’m not saying anything new here, but maybe in a different way:  how much of our “busyness” is of our own creation because we don’t make the right choices?  We inflate our sense of importance such that we have to always be late because we are so busy, or we have to be responding to email 24/7 because we have more important things to do than pay attention to what is going on in the place where we currently are.   Ultimately, this all says, we are so important it is okay if we are just downright rude!  And rudeness has consequences.