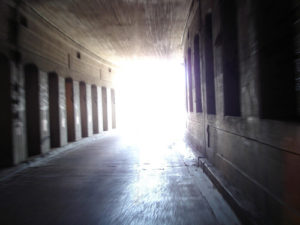 A professor of  psychology and public affairs at Princeton and an economist from Harvard—have affirmed what they call the scarcity mindset.  They have shown that a brain focused on what a person is lacking becomes obsessed with that missing thing to the exclusion of all else and, as a result, the person makes poor decisions.

So, for example, if a person lacks money and suddenly gets a windfall, rather than save some cash for the future, or parse it out thoughtfully and carefully for current needs, a person spends it all on what seems important at the time.  The person acts in the moment with no thought for the future.  There is tunnel vision for the now, the immediate, and no thought to the larger picture.

The two researchers—Eldar Shafir and Sendhil Mullainathan—tested their idea with sugar cane workers in India who get paid once a year, right after the harvest.  These workers go from having lots of money right after harvest to nothing right before the next harvest.  Shafir and Mullainathan found that these exact same people acted very differently when they were flush with money than when they were without money:  flush with money, they had much better impulse control and could think into the future, while when without money the worry was about making it to the following week, with no thoughts beyond that.

While this is research on individuals, I can’t help wonder whether this scarcity mindset doesn’t explain the behavior of too many nonprofits who are obsessed with their lack of resources and the pressure of constantly worrying about securing next year’s funding.  Perhaps the identification of the starvation cycle didn’t go far enough in exploring its consequences, stopping short of the identification of the scarcity mindset.

What if the constant pressure to do less with more (such a misguided suggestion to begin with) and the constant focus on not having enough resources is actually impeding nonprofits’ ability to make good decisions?  And, trust me, there is lots of evidence to suggest that this scarcity mindset is alive and well in the nonprofit sector.  The nonprofit that continually “dips” into its endowment to offset a budget deficit is doing no better than the sugar cane workers, and will ultimately find the cupboard bare.  The board that settles for an executive director that it can afford, rather than find the money to hire the executive director it needs, will find itself back in search mode relatively quickly.   The nonprofit that cuts corners by hiring a combined director of development and marketing and gets 80% of one and 20% of the other, depending upon the hiree, is getting 100% of nothing.

As Shafir and Mullainathan found, when people are poor and money is scarce, that scarcity causes them to make decisions that aren’t in the interests of long-term amelioration but in favor of immediate gratification.

And, so it goes in our nonprofit sector, as well:   too many nonprofits, which often experience scarcities not just in one, but multiple areas—under funded, under staffed, under resourced, in general—make decisions that sustain their hand-to-mouth, month-to-month existence instead of making decisions that can take them from perpetual operation in that framework of scarcity to working in a framework of comfort, if not prosperity.  Time to break the cycle.