Years ago, a colleague said to me, “You can lead a horse to water, but you can’t drown his sorry ass!”  She must have been thinking about nonprofit board members when she said that.  I’m reminded of that turn of phrase as I think about all of the wake-up calls nonprofit boards have received over the years and all the near misses they’ve been granted.  And, yet, so many still act as if they have no clue what it is they are supposed to be doing.  Oh!  Wait!  Too many of them don’t have a clue, while yet too many others do have a clue and still choose not to do their job. 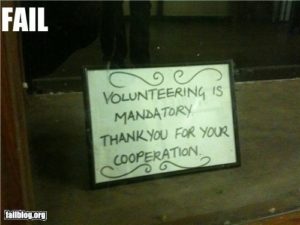 Foolishly, I thought the Penn State fiasco would have been the last wake-up call needed.  Unlike some of the previous wake-up calls, most notably Lemington Home for the Aged, that were less widely reported, Penn State was all over the national media.

Unlike other wake-up calls that had localized media attention and required reading judicial decisions to learn of the facts, The Freeh Report (of the investigation by  Louis Freeh, hired on behalf of Penn State’s Board of Trustees), is available to everyone just by typing its name into a search engine.  While the Freeh report is a key teaching tool in academic governance classes, it has missed the “must read” list of way too many board members.

Nor was there widespread publicity on the lessons that should have been learned from the American Red Cross’ egregious violations of fundraising law after both 9-11 and Hurricane Katrina because the body in charge of responding to the situation—the US Congress—didn’t know what should have been done.  So, instead of clearing out the boards of the American Red Cross after it mislead American donors with each of the fundraising appeals associated with those major tragedies, it took the step of replacing management each time instead of governance.  It should have done both!

In January 2015, the Third District Court of Appeals in Pittsburgh held the employee officers and board of directors of Lemington Home for the Aged who allowed for the collapse of the organization personally and individually liable to the agency’s creditors.   The board, it ruled, had breached its fiduciary responsibilities of duty of care and duty of loyalty.  Boards are expected to know, understand, monitor, protect, etc. the organization’s finances and its financial health, well-being and sustainability.  The Third Circuit did, however, vacate the lower court’s decision to hold the members of the board liable for punitive damages.  So many lawyers wrote about this, raising the warning to nonprofit board members everywhere.  Why didn’t people catch on?

The same year that the Third Circuit was upholding the Lower Court’s finding that Lemington’s officers and board members failed to fulfill their fiduciary responsibilities, the board and officers of Federation Employment & Guidance Service, FEGS, the largest social service organization in New York, were doing the exact same thing.

FEGS closed and within the year, both the Manhattan District Attorney and the New York State Attorney’s General office were interviewing employees, leadership and board members.  Word came out this week that creditors are suing FEGS’ former president, executive vice president and accounting firm in an effort to amass as much money as possible to pay creditors, including former employees.  (And, yes, both those officers already sued for payment of money they claim FEGS owed them, despite their egregiously high salaries and poor job performance).

Can pulling the board in be far behind?  After all, FEGS’ board appears to have breached the same responsibilities of duty of care and loyalty as Lemington’s—and more.  FEGS’ board continued to work with, and accept reports from, an accounting firm that was apparently widely known to have been associated with several other well-documented accounting scandals.

And for and all of these reasons, and all of the other ways in which board after board fails to do their job, nonprofit boards deserve to be held accountable—accountable by the law, by the good employees who are trying their best, despite the errors of the board, to do their job and fulfill the promises of the mission and by the clients and public to which the board is ultimately accountable.