For most nonprofits, it’s either the beginning, or the last quarter, of the fiscal year.  Either way, it’s the time when we’re thinking even more than usual about our money.  Surplus or deficit?  When will it come in and from where?  How can we use it wisely to deliver on our mission promises and still sustain the organization? 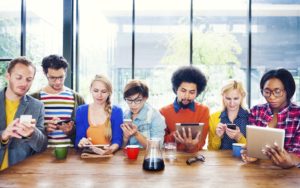 Here are some interesting research findings to inform your thinking and your work around finances.
But so we are clear:  I’m not reporting on results from the hot-off-the-press GivingUSA 2016, as those summaries are omnipresent.  Instead, here are some reports you may have missed.

The first is from Los Angeles County, “The Generosity Gap:  Donating Less in Post-Recession Los Angeles County.”  Despite its geographic limitations, there are some findings worthy of our attention.  (It should be noted that this research was done for the California Community Foundation, so the focus was not just on what residents gave to charities but where they gave, as well, as community foundations are about raising money from the community to give back to that community.)

While we don’t say of Los Angeles what was said of Maine for decades in political circles, “As Maine goes, so goes the nation,” LA is the second largest city in the country and what happens there may portend for the rest of the county.  Thus, one finding which we should ponder is that giving by LA residents was down from 2006, in dollars adjusted for inflation, when total giving was $7.16 billion.  In 2013, total giving was just $6.03 billion.  This reduction in giving was seen across all income levels, as people were giving 2.4% of their adjusted gross income to charities in 2006 and giving only 2.0% in 2013.

The authors suggest that this decrease may be the result of families of all income levels struggling to balance funds for necessities—food, clothing, shelter, transportation, education, etc.—with funds for helping others.  Equally hypothetically, though, it may also be the real arrival of the dreaded donor fatigue that folks have been talking about for quite some time.

In the last 10 years (2006-2016), the LA County nonprofit population grew 12% (nationwide, that growth rate average for the same period is 17-24%, so LA County is a bit below the average).  Did more demand for funds overwhelm, paralyze, put-off would-be donors?  Thus we have discouraging evidence of the response to the problem we’ve been seeing since the Great Recession:  greater need for nonprofit services coupled with a greater demand for money from a shrinking, zero sum pie.

Moving on, now might be a good time to get in touch with your high-net worth donors—however you define this for your organization—and make sure they still believe in your ability to redress the ills of the world.  US Trust recently released some information about its 684 high-net-worth investors (defined as having $3 million or more in investable assets) and found a most disturbing fact:  our donors are losing faith in our sector’s ability to solve social and environmental problems.  A scary 70% of those surveyed believe that such success resides with the private sector!  And while only 11% currently own social impact investments—where the majority (58%) market-rate returns, the study revealed growing interest in such investments, particularly on the part of women, Gen Xers and Millennials.

In its ongoing work to understand donor behavior, earlier this year Abila reached out to a representative sample of 1,136 donors (they’d given at least once to a nonprofit in the past 12 months).  “Donor Loyalty Study:  A Deep Dive into Donor Behaviors and Attitudes,” presents many findings every nonprofit should consider.   For example, it looks at giving across the generations, affirming more affinity in giving patterns and preferences between the younger generations—Millennials and Gen Xers, who gave, respectively, a median gift of $238 to an average of 3.8 charities and a median gift of $465 to 3.4 charities—and the older ones—Baby Boomers and Matures (those born 1945 or earlier), who gave, respectively, $478 to 4.1 charities and $683 to 5.5 charities.

In very similar numbers, Millennials and Gen Xers were motivated by passion for the cause while the older two generation groups were motivated by a belief that the organization relies on their donations.  No surprise, the two younger groups prefer to give online, while the two older groups prefer to give by check.  But where the patterns of similarity break down, and something really worthy of note as it impacts organizational resources, is in each group’s preferred frequency of communication which follows an inverse relationship: as age increases, the frequency of desired communication decreases.

Thus, Millennials want the most frequent (two or more times a month) communication, while the Matures want the least (quarterly or less).   Giving preferences shows both consistencies and divergences.  All four generation groups have giving to health and diseases as one of their top three causes, though none ranks it as first.  For the two younger generation groups, children and youth development is ranked first, with animal welfare rounding out the three for Millennials and social services doing so for Gen Xers.  For both Boomers and Matures, places of workshop come in as number one and social services is second for the former and third for the latter.

One last data point I’ll share, as it ties back to the frequency of communication:  72% of all those surveyed indicated that at least one thing about the content of the communication they do receive from the nonprofit—be it the communication was too vague, not talking about programs that interest them, being dull, not appropriate for the reader’s age or region, as examples—would impact their decision to give.  So, no more dusting off last round’s letter and merely updating the date!