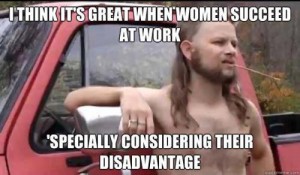 Lean In, the book on women and work by Sheryl Sanberg, appears on track to become to the current population of women in their late teens, ‘20s and ‘30s what the Feminine Mystique and Ms.  magazine were to my generation at that age.  The media is abuzz—to a much greater degree than it was when the writings of Betty Friedan, Germaine Greer and Gloria Steinem hit the world.  And, there is much more media to buzz today!

One of Sandberg’s points—and laments—is the paucity of women at the heads of for-profit companies.  She points out that women hold only 14% of top corporate positions.  According to data as recent as January of this year, there were only 21 women heading Fortune 500 companies, and another 21 heading Fortune 1000 companies.  That is a whopping 4.2% of each!

According to economist Sylvia Ann Hewlett, in India that number is 11% and Brazil 12% (two of the BRIC countries—those countries identified as having emerging economies; the other two are China and Russia).  In her book (which she co-authored with Ripa Rashid), Winning the War for Talent in Emerging Markets:  Why Women are the Solution,  Hewlett offers these astonishing—and as an aging feminist, incredibly disappointing—figures:  “76% of Chinese women, 80% of Brazilian women, and a whopping 86% of Indian women aspire to the top job, compared to only 52% of their US counterparts.”  No wonder they are emerging and America is sinking.

But is the picture of women leaders as bad as the above numbers would lead us to believe?  You decide.  An alternative to the figure that only slightly more than 50% of American women aspire to the “top job” is the fact that 10 million businesses in the US (out of more than 28 million businesses, ¾ of which are one-person operations) are owned by women,  according to the Center on Women’s Business Research.  And women are launching businesses at one-and-a-half times the national average.

And then we get to the nonprofit sector.  How are we doing?  You know   that when people make pronouncements about the state—or status—of women in the workforce, they are not talking about the nonprofit sector.  So, how do we stack up?  Thirty percent of the “CEOs” (and odds are very good  that this is, indeed, their title, as it makes them feel important) of nonprofits with budgets over $7 million are women.  Not a bad start.

And now lower it, because the pay differential between women and men employees in the nonprofit sector continues, be in the top paid position or elsewhere, continues are no one pays  because you know women’s information network, with women earning anywhere from $.61 to his dollar to $.83 to his dollar.  Outrageous that in 2012, we were still paying men more for doing the same job.

My question, though, is not in which sector do women fare better as employees, in general, and leaders, in particular.  My question here is why does this country insist on measuring the workplace success of women by looking solely  at corporate America?  What is the rest of the America’s workforce?  The arrogance of corporate America–yes, Sheryl Sandberg, that includes you—yet again reveals its ugly self as it determines that the only way to measure success at anything is through the lens of the for-profit sector.  Such amazing conceit!

DiversityInc  found that, in 2012, 1.2% (that is six) of CEOs of Fortune 500 companies were Black, 1.4 (seven) were Asian and 1.2% (six) were Hispanic.  The most “recent” equivalent data I could find on nonprofits goes back to a 2009 study of The Chronicle of Philanthropy.  According to that study, 6.3% (or 25 organizations) of its Nonprofit 400 organizations were led by nonwhite CEOs.  Not great numbers, but they sure beat those of the for-profit world!

And if we want to see how women are really faring in balancing workplace success with personal success, we definitely should be looking at the women leaders in the nonprofit sector—all of them, but in particular those who are leading the small nonprofits, those who aren’t earning big six figure salaries.

These are the working women who are taking care of children and/or parents without the financial ability to hire nannies, cooks, live-in help, and other caretakers.  These are the women who must not only bring home the bacon and fry it up in the pan, but stop at the grocery store, the dry cleaners and the party goods store on the way home before even getting to the cooking.  These are the women who will bake their own cupcakes to take to school, clean the house and/or do the laundry for their elderly parents before spending a few late night hours responding to email or writing a blog either before or after squeezing in an hour or so to devote to friends and/or partner.  These are the women who are not only doing it all, but doing it the average American way.  And therein lies the true measure of the success of women in the workplace today.  And we are successful!