For too many decades, nonprofits leaders have been plagued by the fear of overhead:  too high and risk losing donors; too low and risk insufficient capacity to do all that needed doing.  Then, Dan Pallotta did his famous TedTalk, the Overhead Myth letters came out from the three watchdog groups and Bridgespan and the Ford Foundation jointly suggested that it was time for donors to revamp their funding paradigm. 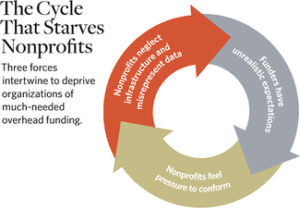 But, did things change?  Sadly, no.  Yes, there was a greater willingness to discuss the absurdity of being a successful business investing approximately $.20 out of every dollar on organizational capacity; and, yes, “overhead myth” secured a solid position in our lexicon.  But that was the extent of the impact.  Nonprofits are still scared to talk about the true costs of programs, to pay more livable wages and to invest as they should in organizational capacity and do things like marketing and real evaluation.  And too many funders have yet to make the connection between solid organizational capacity and strong programmatic impact.

But, just maybe this fear under which so many nonprofits operate is totally unnecessary.  It is certainly what recent findings from research by Grey Matters Research and Opinion 4 Good “The Donor Mindset Study VI, The Elephant in the Room:  Charitable Overhead Ratios and Donor Decisions” suggest.    According to this study, although the 1000 donors they surveyed care about overhead spending, the reality of overhead doesn’t have the supposed negative impact we’ve been told (and by whom?) for decades.

Yes, donors think nonprofits spend too much on overhead; in fact, 57% of respondents think we do.  (Fifteen percent think spending is lower than what is “reasonable”, while 28% think it is reasonable). They think we should only be spending 19 cents of every dollar on such costs, down a bit from earlier this century, when folks were allowing us up to 23 cents out of every dollar to pay salaries, electric bills, rent/mortgage, marketing, fundraising, etc.

There is actually a good percentage of donors who prefer nonprofits that spend more than the reasonable 20%.  In fact, the majority (54%) of donors 65 and older want more than that 20% spent on overhead, and almost a third (32%) of those under 35 feel the exact same way.  They clearly understand the consequences of investing too little if you want to achieve something great.  Socioeconomic status may also influence folks’ thinking, as those with household incomes of less than $40,000 think nonprofits spend 31 cents out of every dollar on overhead, while those with six figure incomes think the figure is 23 cents.  Political and religious identification do not seem to influence people’s thinking about overhead.

While the pushback should have started long, ago, it is now more than time for nonprofit leaders—both those who are paid in dollars and those volunteers who are paid with intrinsic rewards—to stop worrying about what doesn’t matter to most and worry most about what is important:  delivering a quality service to your clients.  It is time for leaders to stop whining and start dreaming a little—not going crazy—but living a little.

Would increasing salaries by $5,000-$10,000 a year allow you to find better qualified new hires and retain staff longer?  Would actually having a marketing budget allow you to reach a larger audience, attracting more clients (if you want them), more donors (always need them), more exposure (never hurts, when it is for good reasons)?  Would hiring a major gifts officer allow the executive director and board members to be more efficient and successful in securing gifts?  Would having new computers and customized database allow clients to be served better?  Would hiring an evaluator to study the impact of even one program lead to a stronger, better program?  Would even a portion of those things for which you’ve been telling yourselves “No!” for the longest time be a worthwhile investment in the now for a greater return in the future?  Then, within reason, what are you waiting for?

Experience (no research here, sorry) has shown me that those who work in our sector for the “right” reasons—for others, community, country, the world—and not for the “wrong” ones—all about self—are not suddenly going to go all “Wounded Warrior Project,” and start spending $.50 or more out of every dollar on overhead.  But think about the potential impact $.30 on every dollar might have on staff satisfaction? client services? using money to make money? ultimate impact and viability?  And instead of cowering in the corner and self-shaming, be upfront about the benefits of investing in the capacity overhead that drives your mission.