Home / Articles / Who Mentored You? 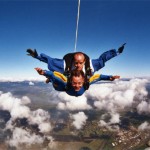 Even in death, my father is still guiding, teaching and showing me the way things should be done.

This past weekend was my father’s memorial.  Though we did not officially invite anyone to speak at his memorial, my sister, brother and I knew well in advance that several wanted to share their remembrances.  The evening of the memorial, we asked any one else who wished to say something, to please feel free to do so.  And the floodgates opened.

My son, who was to be the last speaker, made many a false start up to the podium, only to have to stop as yet one more person stepped to the front to share memories.  And to a person, they all told the same story, with different specifics.  They spoke of how my father had mentored them, though if my father had been asked whom he mentored, he would, in his self-effacing manner have said, “No one.”

They told of how he would pass their desks as he was heading out to a breakfast or lunch and ask if they knew so and so, and when a negative answer came back, he would say, “You should know him.  Come along.”  They shared stories of how my father feigned being too busy to attend a meeting, and would they please go in his behalf, quickly learning that this was my father’s ruse to allow younger employees more exposure and responsibility. They shared memories of the opportunities he had given them, the faith he showed in them and the loyalty he bestowed, the doors he had opened, and the lessons he taught on their craft and, most importantly, the ethics of their profession, all the while lamenting the fact that the profession had strayed far from his ethical standards and expectations of the profession.  They all spoke of how my father had changed their lives and given them the wonderful and interesting lives they have had since having the good fortune to work with or for my father.  And they all spoke of what a dear friend he had been and the hole that now resided in their hearts.

I have known for a long time my father’s mark on his profession, and even on the lives of some of the people who spoke that night.  (The scope of his mark, however, I had way underestimated.)  And even though he would never admit it, I have known for a long time that many, a young person coming into his presence immediately gravitated to him as their mentor and were never disappointed.  But what I never realized until that evening was how well my father understood mentoring.  As with everything else that he did in life, from student to professional, husband to friend, father to grandfather, he aced it!

My father was never “taught” to be a mentor; he just did it.  He intuitively understood that the future of his profession rested on getting the right people into it, cultivating and nurturing them, sharing the ropes with them, setting the standards for them and then letting them fly—with his organization or another.  My father was never asked to mentor; once again, he intuitively understood that, as a leader in his organization and his profession, this was his responsibility.  Not a responsibility for which he was paid, but a responsibility that was his duty.

Sadly, too many in leadership positions within the nonprofit sector (and I am told the same is true in the for-profit sector) do not mentor.  Today, mentoring those who are coming up behind us seems to have become a lost art.  Why?

I’ve several theories, but no proof on any, hence why they remain theories.  First, it is not behavior that tends to get extrinsically rewarded.  I’ve reviewed criteria for a lot of performance evaluations, but I’ve yet to see one that evaluates how well the person mentored.  Supervised? Yes.  Even how well the person coached, from time to time.  But mentored?  Still searching.  Second, people complain that it takes time and they are just too, too busy.  Really?  Letting someone else represent you at a meeting takes time?  Introducing people around takes time?  Ensuring adherence to the standards of the profession?  Okay, that takes time.  But it takes even more time in the long run dealing with the problems caused by employees who cut corners or violated the professional code of ethics.  Third, people think they don’t know how to mentor.  How did this happen?  As more and more programs developed to “teach” people to become mentors, we turned a powerful art into a pseudo science.  Fourth, and, most sadly of all, leaders today do not think it is their responsibility.

Nonprofit leaders, hear me now:  it is your responsibility.  If ever there was a time when we needed to cultivate, nurture, cherish, and encourage the young people in the sector, now is it.  And I do NOT want to hear, “Oh, but if I mentor her, she might leave and go work somewhere else.”  Of course she might, and more power to her—and the sector!  Mentoring is not something we do for our organization; it is something we do for the sector—to ensure that there will always be bright, smart, and dedicated employees wanting to continue the good works of their mentors and the sector.

As a teacher, I am often told by students, years after graduation, that I was their mentor.  Upon reflection, I don’t think so; I was their teacher and their advisor.  And while teaching and advising are both part of mentoring, it is by no means all of mentoring.  As an executive director, I was recently told by someone that I was her mentor.  I was puzzled and surprised and wondered what I had done to be perceived as her mentor.  Saturday evening, listening to all the mentees of my father recount how he had mentored them, I knew that I was, indeed, her mentor.  After all, my dad mentored me.