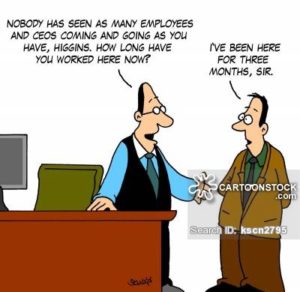 ‘Nobody has seen as many employees and CEOs coming and going as you have, Higgins. How long have you worked here now?’

Lots of people are asking us what the trends are in hiring in the nonprofit sector.  All of the different collectors of hiring data in the nonprofit sector that we’ve seen are saying the same thing: nonprofits are hiring.  According to Nonprofit HR’s “2014 Nonprofit Employment Practices Survey” (the Survey), 46% of nonprofits surveyed increased staff in 2013, as opposed to just 17% that decreased staff, and it looks like more (45%) are hiring new staff for new programs than asking current staff to take on more work (43%).  And the predictions are for this to continue in 2014.

Maybe, though, these aren’t as happy data as they appear at first glance. While nonprofits are increasing staff and hiring, about 20% of that hiring is filling slots vacated by turnover.  Not surprisingly, turnover, again according to the Survey, is the greatest human resources challenge facing nonprofits. While a certain amount of turnover should always be expected in any organization (for-profit turnover rate seems to have huddled in the low teens over the last several years), are there things that might help reduce the rate? Yup.

And the Survey suggests that nonprofits may just be doing everything wrong! As the third largest employer in the US (right behind retail and manufacturing), the nonprofit sector must learn both to do hiring well and hire well.  According to Survey respondents, the three biggest staffing challenges are: 1) having the time 2) to find and recruit qualified staff and 3) have the resources to pay for the qualified staff needed.

If ever there were lame excuses for not doing what is such extremely important work, these are they. In fact, they aren’t even excuses; they are whines! And I am so sick and tired of everyone mindlessly mouthing what has become the most meaningless statement possible—“our people are our most important and valuable resource”—made meaningless because so few walk the walk. (Hmm, wonder if that might be contributing to turnover as employees get sick and tired of hearing the talk, but never seeing anyone doing any walking.)

What do you mean you don’t have the time? What could be more important than spending the time needed to find the best people for open positions that are going to help the organization deliver on its promises? And what do you mean you don’t have the money to pay for what you need? How do you deliver your services, support the organization, raise and/or earn the essential dollars with sub-par staff?  You find the money to pay (Oh, boards, are you listening?) for the qualified staff you need, not hire what you can afford. The biggest mistake, by far, that nonprofits make in hiring at any level of the organizational chart—based totally on decades of anecdotal evidence—is settling for what they can afford rather than what they really need.

Survey data show just how poorly people really care about finding the best—and then keeping the best. For every position type—entry-level/support staff (two of the three places on the organizational chart with the most turnover), mid-level staff and experienced (no clue what that means)—most organizations spent only 31-60 days filling the position. Seriously? I find it hard to imagine how you advertise a position, collect resumes, screen, interview, second interview, make a decision and an offer, and get an acceptance in that short a time.  Particularly since everyone is moaning about not having the time to do this.

Adding hiring to already existing responsibilities and people can turnaround a vacancy to filled position in under 60 days? I am impressed! Maybe they hire well, maybe not. But even when nonprofits pull this miracle out of the bucket to hire, they apparently don’t care much about retaining. Only 17% of organizations surveyed had a formal retention strategy for 2014, which is not the end all and be all of retention. Even without a formal policy, there are cheap and free things an organization can do to retain employees and win their loyalty—and compensate for the less than appropriate wages being paid. While 65% of those organizations with a telecommuting and/or flexible work policy said such a policy had a positive impact on both recruitment and retention, only two out of five respondents said they had a virtual work policy. Again, seriously? And while virtual working is not the only low/no cost “perk” nonprofits can offer, it certainly is much desired and appreciated.

Okay, maybe I will buy that you truly cannot find any way to do better in the salary department, but you can always find ways to do better in the compensation department, using any number of things, like flex-time and an extra day or two off around key holidays or closing an hour or two early on Fridays in the summer, etc. And these can buy a lot of forgiveness for lower than ideal wages and breed a lot of loyalty. (But, please, don’t misinterpret: money is always desired. In fact, 70% of the female respondents in the survey referred to in the next paragraph would prefer more pay over more time off.) While I am not for a minute suggesting that females are the only ones who benefits from the opportunity to telework or from flex schedules, given that women are still far more likely to be the ones to adjust schedules to stay at home with a sick child or attend to an aging family member, they certainly value the option, such options could help to redress the retention problem nonprofits face.

According to the recent Gallup Poll survey, commissioned jointly by The Chronicle of Philanthropy and New York University’s George H. Heyman Jr. Center for Philanthropy and Fundraising, women employees are 72% of the nonprofit sector’s overall labor force, with variations based on organizational size: 82% of the workforce at small organizations, 74% at “midsize” and 59% at “big” ones (defined as groups with $25 million or more in assets). And what else might help the retention problem of the majority of sector employees is working at an organization that cultivates and values women leaders: 44% of respondents believe they work in a sexist organization such that men are more likely to be selected to fill senior leadership positions over equally qualified women. (This research also found some other interesting things about sexist attitudes of nonprofits as they relate to governance and fundraising. Check it out.)

Actually, Gallup has been doing some other interesting research to which those looking to hire should turn. The 2014 Gallup-Purdue Index Report (with Purdue University), lays out the findings on what the index, which was created to measure long-term success of college graduates, says about “the relationship between the college experience and whether college graduates have great jobs and great lives.”

There are some really interesting findings in this study though most not applicable here, so I’m going to cut to the chase and tell you what it says about hiring. 1. Don’t judge an applicant by where/she went to college (unless it was a for-profit school): employee engagement (and, sadly, only 39% of college grads are engaged at work) was the same regardless of whether a student attended a private or state school, one of the Top 100 U.S. News & World Report schools. 2. Don’t ask an applicant what s/he studied, how s/he did, what extracurricular activities s/he did; do ask the candidate about his/her professors. College graduate employees who had a professor “who cared about them as a person, one who made them excited about learning, and had a mentor who encouraged them to pursue their dreams,” (unlike parents who encouraged them just to major in a field that would lead to a job—that’s me, not the survey talking) are twice as likely to be engaged at work than those who didn’t have such a collegiate experience. (And in case you are wondering why this is important to the topic at hand, those who are engaged are less likely to leave.) 3. Don’t ask applicants if college “was the best years of their lives” (they haven’t lived enough to know); do ask them how well college prepared them for life beyond.

Those who believe college prepared them well for the life to follow are three times more likely (than those who say it didn’t prepare them well) to be engaged at work. If you truly believe that people are your nonprofit’s most valuable asset, then put your money, time and head where your mouth is and do what is right and best, not what is convenient and easy.