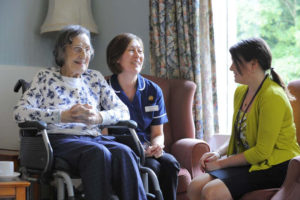 The idea, however, is not that the newspaper would be a social enterprise for the Institute and share its profits with it, but rather that as a nonprofit, the Institute could receive donations that would be used to support the newspaper.  For example, a foundation could give the institute money designated for improved science reporting.  The newspaper still has to run itself as a for-profit but with easy(ier) access to supplemental funds to help run that business while seeking, as Lenfest said, to “meet readers where they are.”  Even if this novel approach doesn’t end up saving The Inquirer in some form, Lenfest and his lawyers creativity have opened the box.  Perhaps it was that opening that allowed J. Mark Baiada, founder and owner of Bayada Home Health Care, and his Philadelphia lawyers to come up with his idea.

Last week, on his 70th birthday, Baiada announced the next step in his succession plan.  The media translated the announcement as Bayada was becoming a nonprofit.  I’m sure many thought they already were, based on what they do, not how they operate.

No, Bayada is not becoming a nonprofit.  Whether the media didn’t understand or didn’t explain things clearly, or what, the reality is, Bayada didn’t become, nor does it appear it is becoming, a nonprofit.  In fact, very little about Bayada itself changed.   It is still and will remain so, at least for the near future, a for-profit organization owned by others.  The company founder has stepped down as the president; before so doing, while it was still a wholly family-owned business, appointed his son, David, as his replacement.  A clear, and common, act of a for-profit company and nowhere on the continuum of best practices for a nonprofit.

Something, however, is changing at Bayada, and that is its ownership.  A newly created nonprofit foundation will, over the next several years become the majority owner of the company, though family members, and some employees, will retain ownership of a much smaller portion of the company.  Given that private individuals cannot own a nonprofit, we have another indication that Bayada did not become a nonprofit.

But the foundation is the nonprofit in the room.  And who chairs the foundation board?  The senior Baiada.  Don’t get me wrong:  the concept of what he is doing is potentially wonderful.  According to Baiada, he has regularly refused to sell the company because he didn’t want to see the mission, values and way of Bayada service compromised, at best, or totally forsaken, at worst.  The new structure is, according to the press release, the means to achieve his desired end of ensuring a) the continuation of “the Bayada way” and b) that the company won’t get sold.  Funny, I’ve never heard anyone ever explain the purpose of a nonprofit as that of protecting a business from being sold.  But that does seem to be at least one key reason for the creation of the foundation.

This is Mark Baiada’s succession plan.  And, given that the announcement of this pending change was actually announced over a year ago, the thought, planning and implementation had begun well before that!)  In making this decision—his legacy plan—he wants to ensure that what he started is continued long after he is gone.

He wants to ensure that Bayada will continue to be an organization that supports charitable organizations.  So, the $1.1 billion dollar, global for-profit organization becomes a sort of social enterprise for the newly created nonprofit foundation.  Normally, it happens the other way around:  a nonprofit needs to generate additional income so it creates a for-profit venture to throw unrestricted dollars the way of the nonprofit.  But here, the for-profit company came first, and the nonprofit is being created around it.

In nothing that I have read have I learned how much of the profits—beyond the majority share—will go to the foundation, as opposed to the individuals, and get reinvested back into the company.  Nowhere have I read what the mission of this foundation will be.  Will it provide subsidies to those who want and need Bayada services but can’t afford them?   Will it operate as a more traditional foundation and provide grants to nonprofits?  How will the foundation guarantee the ongoing support of Mark Baiada’s charitable interests?  Will it fund research and entrepreneurship to find new ways to allow people with disabilities and illnesses to stay in their homes longer?

It is true that we are, and must continue, to look at new structures to meet the community needs that traditionally nonprofits have met.  But let’s be careful to celebrate the right things:  the achievement of what’s best for the public good, not individual pockets.