As a country, we are going soft, and the nonprofit sector is contributing. 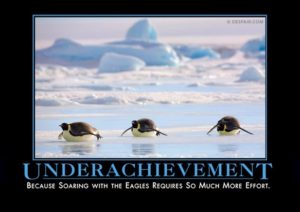 Recently, a friend new to academics told me of one of his students who came to him on the morning that a major assignment was due and told him that she did not have it.  The previous Friday had been so gorgeous, she actually told him, she just had to go down the shore (as you Philadelphians say) for the weekend.

I’ve had this story rolling around in my head for almost a month, now, and I still can’t decide what I think is worse:  the fact that the student made the choice she did or that she was so clueless that she thought she had a perfectly acceptable excuse.

Another friend, not quite as green to academia as my friend with the beach-going student green, teaches at a university where the current debate is whether to allow laptops in classrooms.  Sure, there are some students who actually use laptops in a classroom for what we think of as the intended purpose; but others use it to surf the web, play games, email, you get the picture.   Ironically, this debate is happening just as a new school year is dawning with the campus-wide theme of professionalism.  Yup, all faculty are supposed to figure out how they bring into their classrooms on a regular and consistent basis the concepts, demands, expectations of being professional.  Lesson number one:  don’t surf the web and shop when you are in a meeting; don’t constantly check and texting; don’t use texting language in an official paper.  And the list goes on.

Sadly, these students who do these behaviors also graduate from college, with a number of them going to work at nonprofits.  Far too often, the bar isn’t held very high for them (and all the 11.4 million employees of the sector) when it comes to accountability and other acts of professionalism.  If we are struggling to figure out how to teach and enforce professionalism in college, and nonprofits aren’t demanding it as they should, the future success of nonprofits looks pretty grim.

These two stories came to mind as I read ChooseUST’s report on its recent look at why nonprofit employees quit their jobs.  Where, I thought, is the report on why employers choose to fire employees?  And, then, I caught myself:  too few nonprofit employers actually fire people; rather, they do what I hear all of the time:  “I’m hoping that s/he will get the message and just quit.”

This thought reoccurred in seeing that the second most important factor for job satisfaction was “culture or office environment.”  (The first, in case you are wondering, was “a sense of purpose/calling in work.”)  I get the culture/office environment thing—big time.  In making suggestions for how to ensure a good work environment, ChooseUST focuses on core values:  make sure they are clear and clearly and regularly communicated and rewarding those who live them.  And I absolutely get this, too.  But here’s where this all starts to break down for me.

I do a lot of work with organizations around core values:  identifying them, defining them, integrating them into daily life, etc.  It is exceptionally rare when excellence–or some synonym or proxy for excellence—doesn’t end up in the list of those five to seven core values.  In unpacking exactly what folks mean by excellence it comes down to the usual suspects:  high standards, always striving to do and be the best possible, not accepting mediocrity, etc.   At the time, the speakers and many others listening all believe it true of themselves, though all too often the internal dialogue going on for many is one that disparages it as the reality of the organization.  They point to the employee who watches movies or plays computer solitaire throughout the day, or the colleague who disappears for hours, or the one who always has an excuse for why his work isn’t done on time or why  can’t make the group planning meeting again.

This behavior isn’t secret—any more than it is in the classroom; leadership knows… but, too often, does nothing about it.  So often when I confront these leaders and ask them why aren’t they doing anything about it, they respond, “I am doing something; I’m hoping s/he will figure that there is a problem and quit.”

Those leaders who take that approach—and there are way too many of them—are products of the very system that shuns responsibility in favor of participation trophies and fear of hurting feelings.  Maybe there is value in rewarding the mere act of showing up for the very young, but there is no value—and, in fact, a negative value—in continuing that behavior when there is an important mission-driven business to run.