The second half of last century saw the spawning of research that uncovered the differences in how boys and girls learn.  It revealed the ways that most teachers encouraged boys’ learning and discouraged girls’.  As a result, enlightened educators and schools changed and adapted curriculum, pedagogy and more. 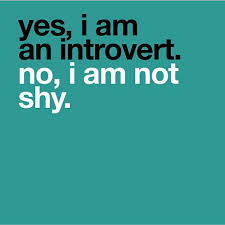 During this same time frame, we also came to understand the unique needs of adult learners, and pedagogy shifted yet again. Having male and female and adult and traditional-aged learners in the same class became, and remains, a challenge for any teacher truly concerned about helping her students learn and not simply interested in passing a class period.  As a result of this research, we came to understand that the path to success was not the same for all.

We seem, however, not to have carried this knowledge into the workplace and made the “leap” to understanding that if people need different paths to be successful in school, perhaps there need to be different options to be successful in the workplace.  I hadn’t realized just how true this is until I started reading “Quiet:  The Power of Introverts in a World that Can’t Stop Talking” by Susan Cain.   As a true introvert, a pronouncement of such to an audience that doesn’t really know me causes laughter, disbelief and argument, I was more than intrigued by the title of this book.  It hasn’t let me down.

This is not an academic book, nor is it, as Cain herself says, a work based on her own scientific research. Rather, it is more a compilation of stories, her own and that of others, her reading of the research done by others, information gathering, etc.  No original research presented here, but equally provocative

Early on in the book, she reports on her visit to Harvard’s School of Business (HBS) and her conversations with self-proclaimed HBS student introverts who, nevertheless, must participate in a pedagogical approach where group activity dominates.  Having a niece who graduated from HBS a year ago (Cain points out that introverts are frequently far more likely to reveal personal facts in the impersonal world of tweets and blogs, despite the fact that these media are read by thousands of people, than they are in a face-to-face conversation; so true!), this description of a culture where  students must do all of their work in groups, eat in groups, go to Germany for Oktoberfest in groups, and other vacation trips in groups, rang completely true.  Just to be on the safe side, however, I had my niece read the section.  She laughed multiple times while reading, the kind of laughter that comes with “been there, done that” recognition, and allowed that while it painted a more extreme version of the reality, the principle was correct.  And why does HBS take this approach?  Because it believes this–group work– is the path to success in the bastions of corporate life where HBS sends most of its graduates.

But it isn’t just corporate America that embraces the model of group work; nonprofit America has done so as well.  Everyone works in teams; we brainstorm as groups all of the time.  We have meeting after meeting, frequently to discuss the same thing we discussed at our last meeting, inching forward ever so slowly.  The rage is open workspaces, great big open spaces with lots of different work stations; in some cases, folks don’t even have “assigned” worksites, just grab whatever suits your mood that day.  This, the theory goes, allows, everyone to feel part of the team–and equal; no walls divide the group—or provide for quiet.  This works for some people, perhaps all of those extroverts out there, but not all.

Contrary to “common knowledge” that is frequently spouted, extroverts do not vastly outnumber introverts (I’ve seen statements that place the number of introverts at less than a third).  The only scientifically based data I’ve found shows quite a different phenomenon.  In 1998, the producers of Myers Briggs, with its I and E “diagnosis”, took a national random sample and found that America is made up of 50.7% introverts and 49.3% extroverts.  They also found that males tend toward introversion (54.1% versus 45.9% extroverts), while women trend in the opposite direction (52.5% extroverts, 47.5% introverts).  Interesting statistics given that men still dominate in the position of for-profit CEO while seemingly embracing the team approach to getting things done!

But research shows that productivity is, in fact, diminished as a result of collaborative efforts, as the noise generated by and the extra effort needed to pay attention to the needs, wants and idiosyncrasies of group members, for examples, detract from productivity.  Cain cites the Coding War Games, a research effort to differentiate the qualities of the best and worst computer programmers.  It wasn’t years of experience, compensation or amount of time needed to do the work (those who had no errors in their work took less time than those who made errors) that contributed to the ten-fold better performance by the best than the worst.  No, the differentiator was that the best had “privacy, personal space, control over their physical environment, and freedom from interruption.”   Sounds like the ideal workspace of an introvert!  The founder of 37signals, a company that produces web-based apps “for collaboration, sharing information, and decision making,” ironically recommends “No-Talk Thursdays,” where employees are not allowed to speak to one another!  Oh, the lengths we might go! (Yes, Dr. Seuss was an introvert!  Along with Steve Wozniak, Albert Einstein, Bill Gates, Marie Curie, Warren Buffet, and Charles Darwin, to mention but a few greats.)

As in successful learning, one size does not fit all in workplace performance.  How many great minds and creative geniuses did we lose along the way when we were forcing all students to learn the same way, when we assumed all were auditory learners as opposed to some auditory and others visual learners?  Too many to count, too depressing to contemplate!  How many high performers are being devalued by their supervisors because we force all employees to conform to the latest fads and hot trends, work the way we think they should instead of in the manner most conducive to them?  In these economically tough times when we cannot necessarily financially compensate our employees as well as we should want, we can give them the workplace environment that matches their needs and maximizes their productivity and satisfaction.  We’d be fools to do otherwise.