Like a tabula rasa, I believe there is no such thing as human nature; rather, each of us is encoded as we as grow and are nurtured.  I do, however, believe that the majority of people are basically good.  And, when people are suffering, the majority of people want to help.  Unfortunately, however, helping is too often reactionary rather than thoughtful.  We are seeing the truth of that statement now, in the days after Hurricanes Harvey and the forthcoming Irma. 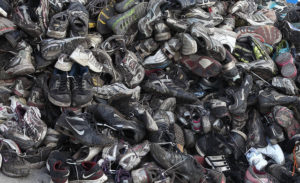 In the past couple of weeks, we’ve seen the generosity of millions, from school children to the usual philanthropists and celebrities and everyone in between.  But, as those experienced with disaster relief can tell you, we are yet again seeing a disconnect between what donors want to give and what sufferers need most.

While we are impressed with the mountains of used sneakers and clothes and food that have been collected, are they what are most needed by the relief providers and victims?   But clothing, toys, canned foods, pile up quickly and rapidly diminish in need and value.  And when those donated goods are the result of donors cleaning out their closets and pantries, selecting what they wish to get rid of, as opposed to is most useful, the donors may feel good, the piles will look impressive, but the help value is limited to non-existent.  And in many cases, the cost of collecting, transporting, distributing and later disposing of unused items, only adds to the disaster’s final toll.  While I understand the desire to give something personal rather than the unemotional process of checkwriting, this isn’t really about the donor.

The reality is that money is the best thing any of us can send to those areas dealing with a disaster.  With funding, relief agencies on the ground can determine what is needed for whom, rather than trying to jerry-rig donations of goods to fit the situation.  So then the challenge becomes where to give.

Since the hurricanes’ arrivals, the media has been constantly recommended that we send donations to the Red Cross, as most high profile donors have done.  In times like these, I’m often asked for recommendations of charities and always explain my unwillingness to personally support the Red Cross.  I explain Red Cross’ history of misusing funds, misleading donors, being more show than substance.  I review the history of almost as many CEOs—both interim and theoretically permanent—as number of years, and the Board’s solution to fire CEOs rather than to do that and look at their own performance and how that could be contributing to the failure to be a stand-up nonprofit.  I send them to the ProPublica/NPR expose on the group.  Given my lifelong relationship with best practices for nonprofits, how could I possibly endorse the Red Cross?

So, why, then, does everyone else champion the Red Cross?  I don’t know this for fact, as I’ve never seen any research, but I suspect it has something to do with name recognition and size.  Sadly, in this country, we think if we know your name, you must be good.  And, if you are big and we know your name, you are really good.  Time to get over this—if you’ll excuse me, big time.  It is far easier to go with what you know rather than do the research to find out who they really are.

Last week, I knew where I was not giving money; I just didn’t know where I was giving it.  Fortunately, there were a number of sites that weren’t doing the knee jerk reaction of just pushing donations to the Red Cross, but were offering suggestions of additional organizations.  I considered two of the alternatives:  one, a local Houston organization I knew nothing about and the other an international organization I knew well.  Wanting to give local, I did some quick—because, yes, I wanted to give while I was thinking of it (and trying to do what the efficiency experts say and touching something only once)—research on the one organization I didn’t know and couldn’t find what I needed to give me confidence to donate.  So, I went with the international organization that I trust to do what it says it will and to use my gift wisely and carefully.

While I had no qualms giving this organization my money, I was bothered that I couldn’t give locally, to a staff that likely knows the Houston community and its needs better than even the best national or international organization.  This, coupled with the juxtaposed pictures of the destruction of Harvey and the destruction of the wildfires in the Northwest, got me thinking about how badly prepared so many nonprofits are for helping with disasters.

The Red Cross gets all the knee jerk mentions of where to give because everyone knows them.  It is, no doubt for so many, the first thing that people think of when a disaster of any proportion hits.   But that did not happen by chance; nor is it simply a function of the organization’s 136 year history.   It is a function of a continual aggressive marketing campaign.  Why aren’t other appropriate organizations that play a role in disaster relief cultivating relationships with their local talking heads and those in front of whom microphones are always thrust?  Why doesn’t every nonprofit that could play a role in disaster relief have a crisis management plan for those situations which it will aid (as opposed to those crises that befall it) that includes such things:

One of the things the Red Cross has done well, proven by the fact that it continues to garner the bulk of disaster relief support years after it has been revealed that it isn’t the best at delivering disaster relief, is self-promotion and readiness to act immediately.  That’s one lesson that other nonprofits that quietly serve as part of the disaster solution can readily achieve with planning and intention.